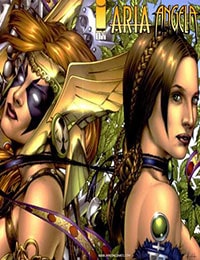 The cross-over of the millennium! This month, ARIA--last year''s hottest new title-- crosses paths with Todd McFarlane''s ultra-popular avenging angel, ANGELA, in a special, prestige format, two-issue event. Set among the cobblestones and gaslights of Victorian London, ARIA/ANGELA: HEAVENLY CREATURES brings together two of the most popular female leads in all of comicdom. Lady Kildare, expatriate princess of Faerie, is living a life of aristocratic decadence among London''s social elite. One night, while slumming among the city''s notorious underbelly, Kildare and her companions come across an illicit, underground sideshow, boasting Creation''s Most Wondrous and Perverse Curiosities. The centerpiece of this bizarre menagerie, A genuine Angel, held in captivity! This sets the stage for an unlikely alliance and the beginning of an unforgettable tale of mystery adventure and retribution. HEAVENLY CREATURES is the first miniseries to feature TODD McFARLANE''S ANGELA since 1995. Fans have been clamoring for her return for half a decade, and now she ''s BACK! Written by acclaimed writer Brian Holguin (Spawn, Spawn: The Dark Ages) and brought to life through the breathtaking art of Russ Manning Award winning artist, Jay Anacleto. HEAVENLY CREATURES is the absolute Don''t-Miss book of the year!