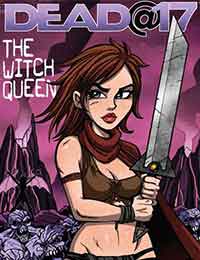 DEAD @ 17''s PENULTIMATE CHAPTER BEGINS HERE! After being forced to kill her closest friend, Nara found herself banished to Purgatory by the Beast from the Abyss. Doomed to wander a hostile and timeless wasteland ruled by the mysterious Witch Queen, Nara has accepted her fate as penance for her actions. Haunted by her past, she faces her greatest challenge as she confronts who she''s been and what she will become.