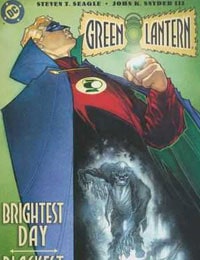 A classic tale of the original Emerald Gladiator is told in this lavishly painted one-shot! When a planeload of mysterious foreigners carrying a secret weapon is forced to land in the wilds of Gotham City''s Slaughter Swamp, radio announcer Alan Scott springs into action as Green Lantern! But the rescue attempt is thwarted by a malevolent brute Scott has never seen before: the murderous man-monster known only as Solomon Grundy.