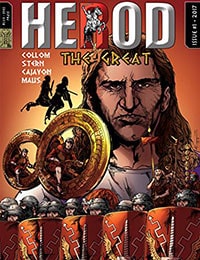 For young Herod the assassination of Julius Caesar would begin his own rise to power in Judea. But at a great personal price. Before he became king, his father and two brothers would be murdered. Soon he was at war with the Arabs, who refused to pay tribute to the new roman empire. Unlike his bordering enemies, Herod chooses to embrace the rule of Rome. Backed by the emperor, he establishes a client kingdom that forcibly maintains peace. Despite many accomplishments, the Jews revile Herod and question his authority. His personal life if fraught with familial intrigues and conflict. Amidst all this - Herod''s dark secret continually resurfaces: he has prophetic abilities, and visions of future events - a gift that will haunt him until his gruesome death.