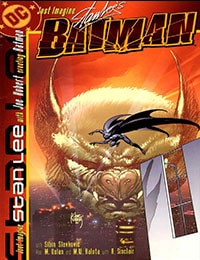 Stan Lee and Joe Kubert present a Batman unlike any seen in comics before. The first in a series of stand-alone one-shots introduces Wayne Williams, a black man framed for armed robbery. Consumed with thoughts of revenge against those who framed him, Wayne is freed from prison with a powerful physique and a bold new purpose...a purpose he acts out as a masked wrestler called Batman. Plus, a backup story (co-written by Lee and Michael Uslan with art by Michael Wm. Kaluta) focuses on the lives of the everyday people in the Just Imagine... universe.