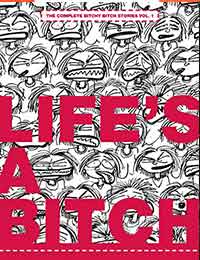 Naughty Bits, the longest-running solo comic by a female alternative cartoonist, came to an end in 2004 after a 14-year, 40-issue run. Beloved for the expressive scrawl of Gregory''s line and her take-no-prisoners satirical approach, it was particularly notable for introducing the world to Bitchy Bitch―a woman who is eternally, magnificently, and for the most part, quite justifiably pissed off at the world around her! This volume collects the entire first half of the Bitchy Bitch saga, and it ranges widely in her eventful life. There are stories about Bitchy''s travails as a little girl (when she was just Bitsy Bitch), including that greatest horror of all, the holidays; a long sequence about her hippie free-love days in the ''70s (and the harrowing abortion that followed); tales of her miserable days as an office drone surrounded by dunces, lechers, and the occasional ultra-Christian maniac; and the hilarious full-length graphic novel Bitchy Takes a Vacation, where a tropical getaway turns into a fiasco (romanic and otherwise) of epic proportions.