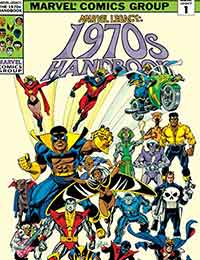 From the Venerable Vaults of Marveldom, it''s the Mighty Marvel Handbook -- 1970s style! Just what is the 1970s Handbook, you ask? Imagine a Handbook written at 11:59 p.m. Dec. 31, 1979. The profiles within cover everything published by the hallowed House of Ideas up until that point. So if it''s from a comic that has a December 1979 cover date or earlier, you''ll find it in this magnificent mag! Featuring the Avengers, Captain Marvel, the Defenders, the Fantastic Four, Power Man, the Punisher and the X-Men as they were in the 1970s, as well as''70s-era characters such as Black Brother, the Deadly Dozen, the Faceless One, Golem, Hellcow, Lady Liberators, Manphibian, Ms. Marvel, Mr. Zodiac, Sons of the Tiger, They Who Wield Power, Xorr the God-Jewel and more!