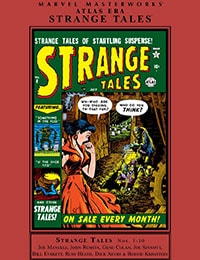 Prepare yourself for a haunted Halloween full of pre-Code horror courtesy of the Marvel Masterworks'' Atlas Era! We''re turning the clock back to 1951, the time when horror reined supreme in comics. These never-before-collected stories of ghosts, ghouls, monsters, morgues, vampires, and more than a few terrors-that-dare-not-speak-their-names aren''t just some of the most frightening tales ever published, they''re also by a frightening array of star comic-book talents! See why Gene Colan says He Wished He Was a Vampire! Look out when Bill Everett gives The Evil Eye! Come along as Russ Heath finds a planet that may - or may not - be Uninhabited! Prove to Bernie Krigstein if you were The Boy Who Was Afraid, and to stand in shock and amazement at the bevy of stories lurking just around the corner by Stan Lee''s right-hand man of the ''50s, comics great Joe Maneely!