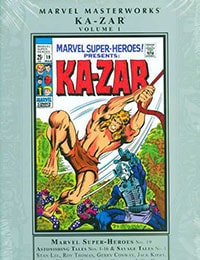 Beyond the cold Antarctic wastes, in the depths of a secret hidden jungle, Ka-Zar rules the Savage Land. Populated by dinosaurs, barbarians and saber-tooth tigers, this land that time forgot is threatened from beyond its borders by enemies including Kraven the Hunter and madmen still fighting World War II and from within, by the bizarre Garokk the Petrified Man and the sun-priestess Zaladane. These adventures, the origin of Ka-Zar and Zabu, and more await you! Featuring stories never before collected, this inaugural Ka-Zar Masterworks showcases a bona-fide who''s who of top comics talent! Collecting MARVEL SUPER-HEROES (1967) #19, ASTONISHING TALES (1970) #1-16 and material from SAVAGE TALES (1971) #1.