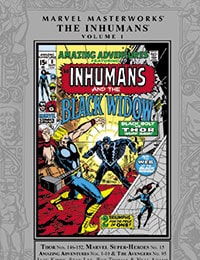 In 1965, Stan Lee and Jack Kirby gave a strange family of outcasts their debut in the pages of Fantastic Four. Responding to their Shakespearean pathos and Kirby''s out of this world character designs, the fans loved them - and wanted more! The mysterious origins of Black Bolt, Medusa, Gorgon, Triton, Karnak and the rest of their wondrous, secret world was initially revealed in a series of Thor features.