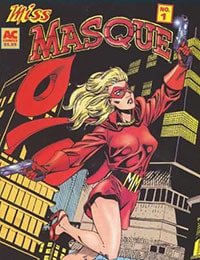 Spinning off from February''s Sentinels of America #1, the sexy, sultry, scarlet-clad heroine known as Miss Masque gets her own title!! Among the most popular of the Golden Age Nedor/Standard /Better publications heroes that AC revived in the early 1990′s,she appears here as a star feature on her own. Armed with nothing more than her wits, lithe athleticism, and a pair of .45′s, the costumed adventuress who was once bored socialite Diana Adams rights wrongs with a different slant, taking on everything from a sleazy TV schlockmeister, to a conniving con-man, through a snakeskin-sporting supervillainess, in a trio of stories that span her history- from her original 1940′s costume and incarnation, ( in a brand- new, never- before-seen “retro” lead story, by Mark and Stephanie Heike) to the contemporary era. (reprinting two modern AC stories, originally seen in Good Girl Art Quarterly #10, and AC Cnnual #4) She takes on evil in many forms- but always looks good in her minidress and hat. Stories and art by Mark and Stephanie Heike, Nick Northey and Richard Pollard.32 pages, black and white with color cover. Standard comic book size.