On The History Trail With Ariane & Nino 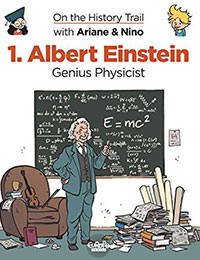 On The History Trail With Ariane & Nino


Alternate name:
On the History Trail

Nino would rather be outside playing than stuck inside doing homework—especially science homework. Then he discovers that one of the greatest scientists ever started out feeling the same way: Albert Einstein—the guy who invented that famous formula: E=mc2. And, as Ariane explains, there was a lot more to Einstein than just formulas. Thanks to him, we have GPS devices and electric gates, nuclear energy and … well, yes, also nuclear bombs. Einstein did everything he could to make the world a better place—but after all, he was only human!