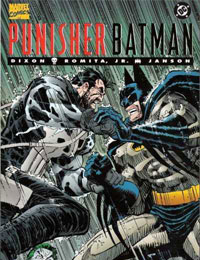 Picking up a few months after Batman/Punisher: Lake of Fire,Punisher finds himself back in Gotham (much to his displeasure) and in a firefight with local street thugs while Commissioner Gordon and Co. watch and wait from afar. Punisher whittles down the thugs until he has one left to interrogate: he is looking for Jigsaw. Batman, too, is watching from a distance, but he finally decides to act before Punisher destroys everything and everyone. Batman attacks Punisher, allowing the thug to get away. Batman knows a bit about the Punisher from a distance (since Jean-Paul was wearing the mantle the last time Punisher came to Gotham), but Punisher does not know he is facing a different person under the cowl, thinking the Batman is truly a schizophrenic who changes his fight styles and personalities easily. Despite Batman''s grudging acknowledgement they both are loosely out for the same goals, Batman has no desire for Punisher''s death-dealing vigilantism in his town, and so he commits to driving the Punisher out of Gotham for good. Punisher escapes in the wreckage during their brawl, leaving Batman to track down what brought Punisher to Gotham in the first place, knowing the Punisher will be there sooner or later.