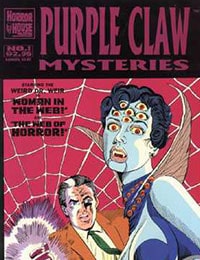 Dr. Jonathan Weir has for decades been the keeper of The Purple Claw- an ancient and powerful mystical artifact that is lethal to all things evil. The popular supporting cast member from the pages of AC''s Femforce (And caretaker to dozens of slumbering Golden Age champions in his Vault Of Heroes. ) gets his own one-shot special. In a new lead story ( That also incorporates a partial flashback of the origin of The Purple Claw, originally seen in AC Annual # 2) Dr. Weir battles a nemesis from almost forty years ago- Countess Arachni, in The Woman In The Web, written and layed out by Bill Black, drawn by Chris Allen, and inked by Chris Dreier and Mark Heike. A weird and spooky modern-day tale. Then, in a special classic Golden Age reprint from The Purple Claw''s original run, you get the complete The Web Of Horror, chronicling Doc Weir''s first run-in with Arachni, back in the 1950''s, as drawn by Brown and Gantz, as crisp, sharp and perfect as the day it was drawn. Color cover by Bill Black, interiors are black and white with graytones.