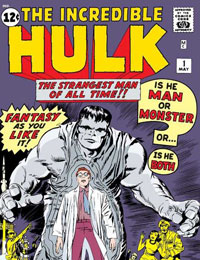 As scientist Dr. Bruce Banner prepares to test a new weapon for the U.S. military, the gamma bomb, he is pressured into preemptively launching the bomb by visiting scientist Igor Drenkov and General Thunderbolt Ross. Having commenced the countdown Bruce notices a civilian in the test area (Rick Jones) and rushes out to save him. Unfortunately Bruce Banner is caught in the explosion of the bomb and is bombarded by gamma radiation while Rick is safely shielded in the bunker. Awaking later in a military hospital as the sun sets Bruce Banner begins to transform into a grey-skinned goliath called the Hulk and escapes the military base fleeing into the desert.