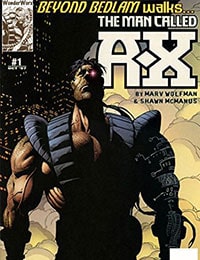 The City of Bedlam was founded by criminals in the 1920s, and today it is still run by ten criminal families. But one of the families has plans to take over the city. Into this combative world of crime run rampant comes The Man Called A-X. He has no idea who he is, how he got to Bedlam or what his role is in the crime war to come. All he cares about is learning who he actually is and to stop whoever is trying to control him.