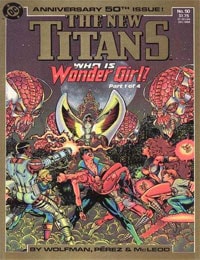 This issue begins with the Titans in their headquarters when they are attacked by aliens. A strange old woman in a robe stops the aliens and talks to Donna Troy, telling her that her origin was all lies, however, she still remembers the fire, though her not rescuer. Rather than being inspired by Wonder Woman, she was inspired by an American flag. She meets up with Kid Flash, Robin, Speedy, and Aqualad and form a team with them, even suggesting the name. The old woman then tells her that she is Phoebe, the Greek goddess of the moon, and the Greek gods need her help.