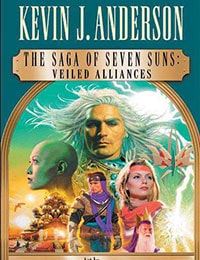 Novelist Kevin J. Anderson''s popular science fiction series comes to comics as an original hardcover graphic novel! THE SAGA OF SEVEN SUNS: VEILED ALLIANCES, is a complex and vast story told on a cosmic scale. As the human race expands into the stars, they find themselves caught up in the politics and long-standing feuds of several powerful alien races. It''s a tale of galactic empire building, filled with political and familial intrigue, love and war, and a host of alien lifeforms, all competing to be the supreme force in the universe!