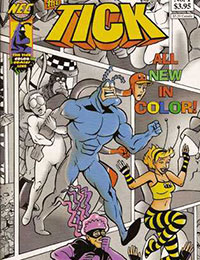 After 14 years, it''s finally here at last... the first-ever, all-new, all-color continuing bimonthly Tick comic book series! Bearing the classic The Tick logo, and starting with a new #1 issue, The Tick Color series will feature all-new stories of The Tick and his entire Universe in full-length, four-color stories. The Tick Color series will appear every two months throughout the year 2001. Which works out great since 2001 is the year that The Tick''s new live-action TV series debuts on Fox television! The Tick appearing in full color is a momentous occurrence in our world, but it''s also an earth-shaking event in The Tick Universe! As you might expect, the transition to color does not escape The Tick''s notice! In the first issue, The Tick chases the villainous Thrakkorzog to the alien''s other-dimensional homeworld, only to discover that Thrak''s dimension is awash in color! After a dramatic battle, The Tick escapes back to Earth through a handy inter-dimensional portal. But unknown to the hero, with his return back to Earth, The Tick has unwittingly exposed his own universe to an all-powerful comic book force: The Power of Full Color! The Tick comes to realize exactly how blue he really is. His universe, along with everybody a