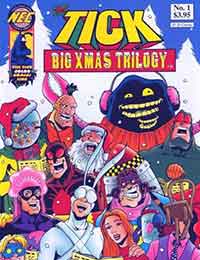 The Tick and his friends celebrate Christmas this year in blazing style with a three-issue Tick Christmas spectacular trilogy... and all three issues will ship on the same day! The covers, by fan-favorite Sean Wang, form a gorgeous panoramic three-part triptych and feature most of the heroes, villains, and supporting characters who have appeared in The Tick''s 16-year history! Racked together, the three issues of The Tick''s Big Xmas Trilogy are sure to be the most eye-catching covers on store racks in November and December! The story is appropriately epic for a three-part Christmas extravaganza! In it, the Tick, the Yuletide season''s favorite son, discovers that the Christmas Spirit appears to be on the wane in The City this year. He decides to boost the supply of Christmas cheer by staging a Christmas Pageant, and getting everyone involved. Even The City''s costumed super-villains agree to participate, although with Chairface Chippendale and The Terror highlighting the evil cast, it may not just be seasonal good will at work! A saga too big for one comic, heck, too huge even for two comics!, The Tick''s Big Xmas Trilogy is a tale of such breathtakingly epic scope that it requires three whole issues to relate, which makes a lot of sense since it''s a trilogy!