War of the Undead 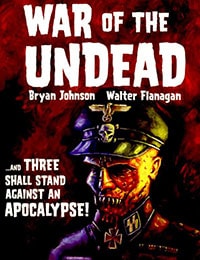 War of the Undead

In East Germany in 1945, Hitler has committed suicide and the war is over, but a secret cabal of Nazis have an insane plan to resurrect Hitler''s soul from Hell and place it in an earthly vessel. The ultimate goal? A planet lorded over by the unstoppable force of an immortal Hitler backed by an endless army of reanimated SS soldiers. To do this, the Nazis will have to gather the earth''s greatest monsters: Dracula, the werewolf and Frankenstein''s monster! World War II might soon be over... but THE WAR OF THE UNDEAD is just beginning.